Residents from Bootle, Anfield and Kirkby all reported seeing the phenomenon with lots of people speculating that the flashing moving lights were extra-terrestrials!

Subsequently people from these areas navigated to social media platforms to share what they had seen and spread the word. A lot of people were confused, and in many ways unsettled, by what they had witnessed with the possibility of aliens even mentioned. Yes, aliens would you believe!

One tweet read, “Why lights in sky above Bootle and Walton, zigzagging about… What is it?” which was then quickly followed by, “Anything on in town? Three mad lights on the clouds, might be UFOs!” Clearly showing the instant noticeable publicity social media platforms now offer. In the video’s that where consequently streamed, people showed several lights – of different sizes – moving in random directions in the clouds. Some Twitter users decided to offer explanations to what the lights could be…some guessed at crossing lights – some added a humorous edge and said “I, for one, welcome our new alien overlords #LiverpoolLights”

A selection of Liverpool Echo readers messaged the newspaper, tweeted and even – in some cases – called the office! Some were asking for an explanation of the strange goings on, with an awful lot of people left scratching their heads at the, quite frankly, irregular occurrence! The lights had also been captured on film, which shows strange flashing lights in the clouds.
How much does this clearly show the impact lighting has on a setting? Making sure you have the correct obstruction lighting makes sure that you prevent collisions, which is a major – yes major – element when you think about safety. This instance shows that the object seen high in the sky has only been spotted because of – yes – its lighting!

“@LivEchonews 3 lights seen across Liverpool sky is coming from the Circus based in Walton Hall Park.”

So, this has prompted me to look at two key, key examples that we currently have available. The WLI-SLI-EXIIC, which is a low intensity explosion proof light, is designed for areas made hazardous by abnormal conditions resulting in the presence of highly corrosive elements, combustible dusts and highly flammable vapours. 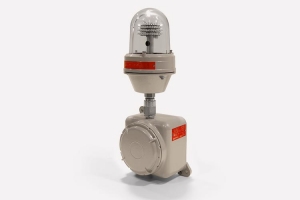 There is no understating how useful these types of lights are. Have you given thought to your lighting? What exactly do you currently have in place? It has made you think hasn’t it……..